"To know what Watsu is, it must be experienced. Watsu interweaves movement and stillness. It has a beginning and an end, and it is endless."
from Watsu: Freeing the Body in Water,
2nd ed., by Harold Dull, 1997

Watsu, (Water Shiatsu), the world's first aquatic bodywork, was developed in the early 1980's by Harold Dull, an instructor of Shiatsu who studied in Japan. Floating a person in body temperature water and applying stretches and acupressure points as used in Zen Shiatsu opens and frees all energy meridians; the channels through which our "chi" or life force, flows.

Healing Dance evokes the essence of water in fluidity and movement. 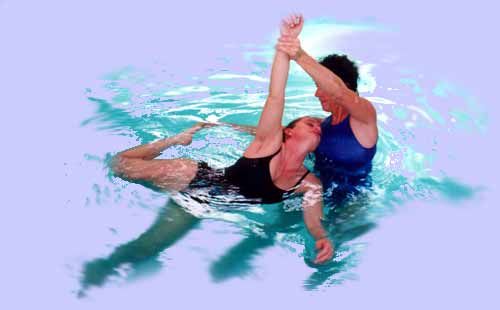 It is a complementary technique to Watsu and Waterdance. Powerful in its own right, combining the freedom,  3-dimensionality of Waterdance with the closeness and nurturing of Watsu. This form follows the natural tendencies of the body moving in water with waves and spirals and emphasizes the sensation of water flowing past. Some moves combine the contrast of closeness into total release while others offer dynamic and creative stretches.

Healing Dance was developed by Alexander Georgeokopoulos- a former ballet dancer and choreographer who began studying Watsu in 1990.

Jahara Technique is a unique way of "being with" the water. Applying the properties of water and specific body mechanics, to the concepts and principals of, geometric support, adaptability, opposing directions, leverage, vertical movement (the breath), spinal alignment, and invisibility (of the therapist). 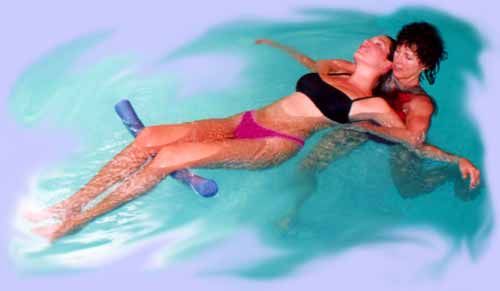 This technique uses a flexible floatation device or "third arm" under one or both client's legs, giving precise support while allowing for spacious freedom of movement. Gentle, constant traction of the spine results in overall expansion of the body. Continuous-flow movement; weaves a web of infinite space, which elicits a deep, profound relaxation of mind and body, creating a sense of "well-being".

Mario Jahara Pinto is the originator of the Jahara Technique, which he started to teach in 1996. A Zen Shiatsu master, Watsu instructor and author of two well-known books on bodywork; he has been an internationally successful teacher for over thirty years. Mario understands bodywork as a way of self-expression and encourages students to develop their own style, combining freedom and creativity with a solid understanding of the body structure. He integrates technique and heart, and his approach is what he calls "the power of gentleness".

In Waterdance, the body is gently and gradually moved underwater providing an environment free of gravity where there are limitless ways to be moved and stretched. Using elements of massage, Aikido, rolls, inversions, dance, snake and dolphin-like movements, induces a deep state of relaxation and meditation.

Waterdance (Wassertanzen in the original German), developed by Arjana Brunschwiler and Aman Schroter in 1987, facilitates reaching deep within the self, resulting in profound healing.